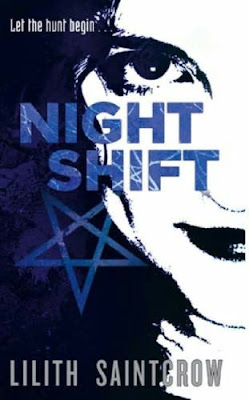 When I invited authors to be guest bloggers on the Hotlist, Lilith replied that she would be interested. But she didn't really know what to write about. When I suggested that she could write a piece on urban fantasy being considered lowbrow crap by some, she immediately jumped on the opportunity!

If you are not familiar with her work, I figure that you have guesses that Lilith Saintcrow writes urban fantasy novels. To learn more about the author and her books, visit http://www.lilithsaintcrow.com/. Her latest book is Hunter's Prayer (Canada, USA, Europe), sequel to Night Shift.

In any event, you know that an article titled Angry Chicks in Leather is going to be good!;-)

But that's not all there is to it.

Urban fantasy, they tell me, is "hot" right now. Paranormal romance (vampire/werewolf/something girl meets vampire/werewolf/something guy, wackiness or danger ensues, happy ending happens) is just as hot, but the "romance" tag keeps it from being literature. The "fantasy" tag keeps urban fantasy from being classified as Serious Literature as well.

It reminds me of Tom's Glossary of Book Publishing, where LITERATURE is "Designation applied to titles judged unsaleable", and MAINSTREAM FICTION is "The pretense that there is a group of readers who can be reached through writing that is sufficiently unspecific as to exclude no one". There's just one thing lacking from this set of definitions--the fact that Literature and Mainstream Fiction are seen as highbrow.

They're genres you don't have to act ashamed of writing in. But romance or urban fantasy? You might as well start embroidering your own scarlet letter, honey.

Paranormal romance is considered lowbrow and trashy because it's female. Despite the fact that it's a multibillion-dollar business (and every dollar a woman shells out for it costs more because let's face it, we earn a lot less), it's still that pink-jacketed crap for bored housewives. Tom Clancy is supposed to be Real and Hard-Hitting, even if his "novels" are thinly-veiled technical manuals. Nora Roberts is supposedly less Real because she writes about feeeeeeelings. While we could debate the relative merits of Clancy vs. La Nora all day--and not agree, mind you, because Roberts is just plain the better writer--the fact remains that Clancy has a better shot at being considered "serious" because his is MAN'S FICTION.

Urban fantasy is mostly women's fiction too. (Yes, I know there are significant exceptions, like Jim Butcher, Simon Green, and Charles de Lint. We'll get to that.) There's a lot of crossover between paranormal romance and urban fantasy. I like to say that UF is PR without the HEA (that's Happily Ever After, for those just joining us.) Which touches on the thing I think separates urban fantasy from other genres, the reason why it's hot, and the reason why I think it's a direct heir to Raymond Chandler and Daishell Hammett, those masters of the gritty noir thriller.

Sure, UF is full of chicks in leather pants with big guns or special powers. But so is sci-fi or, say, some of the men's suspense series (Two words: Mack Bolan!) Leather pants and firepower do not an urban fantasy book make, but a lot of industry people have trouble defining that something-extra that makes a true UF title. Like Judge Potter Stewart, we know it when we see it--but what is it?

It's ambiguity, pure and simple.

What truly defines UF, and why the genre has exploded recently, is the moral and ethical ambiguity of its protagonists.

Urban fantasy is pretty much the only genre today exploring not only the ethics of power and consent, but also serious questions of violence and gender relations from a primarily female point of view. There are significant exceptions, to be sure--I mentioned them above; UF series with male protagonists. But the really huge bump in titles has been series and books with female protagonists, examining these questions from a female perspective.

In urban fantasy, the protagonist is dealing as best they can with a world where "good" is relative. Moral and ethical quandaries lurk under the surface, there are very few clear examples of pure unstained good. The lead character's talents and abilities either set her apart in or initiate her into a world where there is very little in the way of certainty. Friends and foes change places, and antihero isn't so much the order of the day as that old noir trope, the "decent person in an indecent world".

Part of what makes this so fascinating to me is the fact that female UF protagonists are almost without exception extraordinarily tough, and that violence is acceptable for them to use. This is a huge revolution in the type of stories our culture tells itself. Violence in our culture is a man's game. Women are supposed to be weaker and more passive--the recipients of violence or protection, instead of active agents dishing it out. In paranormal romance, nonviolent heroines--or heroines who follow gender norms more closely--is more the rule, but the exceptions are popping up like mushrooms after a week of rain in my backyard.

The responses of female protagonists to violence lies at the heart of the moral and ethical ambiguity that makes for good urban fantasy. Our culture is horrified at the idea of the Dark Feminine--the woman who demands for herself the right of violence and doesn't feel bad about it.

Or, if she feels bad, doesn't let it stop her from blowing away her enemy, whether in self-defense or because she is handing out justice. Who, let us not forget, is a woman too.

We have whole genres overwhelmingly dedicated to the male "right" of violence--military hard sci-fi, suspense, Westerns, the Executioner knockoffs and pretty much every damn movie made about a cop or an army man (or group of men, a dirty dozen) going outside the chain of command or the norms of behavior because their violence serves a higher cause of justice or protection for those same norms. Urban fantasy is the first such genre I can think of that adds another layer of tension by switching the gender of the protagonist, making it truly socially groundbreaking.

The simple move of violating our expectations by placing a woman in the position to dish out the hurt introduces a lot more gray into areas normally considered black and white. Questions like When is violence acceptable? or What is justice, and can it be administered personally? become questions with no right answer, questions we must re-examine.

It's not just in books we have this ambiguity. Buffy the Vampire Slayer, Kill Bill, and Sympathy For Lady Vengeance all cover the same territory, with varying resolutions (including none) of the prime questions. These type of movies would be unthinkable a very short time ago. (Unless we're willing to press exploitative titillations that never made much money into service and call them groundbreaking as well. But I digress.)

Buffy, Beatrix Kiddo, and Lady Vengeance are all women with peculiar talents only brought out by the (culturally male) training for violence. The tension between their talents and training, their need to dish out justice (Buffy fights demons, Beatrix and Lady Vengeance are out for revenge against foes you can't help but understand the need to kill) and the sometimes-urges to be a "normal" female creates vast wellsprings of ambiguous tension.

And how could I go any further without mentioning the series that blew the UF genre wide open?

Anita Blake started out as a woman who had little trouble murdering the monsters. That was her job. The reader wasn't sure if she would become the things she hunted down and dispatched, if she would kill Jean-Claude or sleep with him, or both, and got a vicarious thrill from experiencing absolute license through her. In later books, the tension drained away as Anita became more gender-normal and sexual relationships rather than noir ambiguity became the primary focus.

But those first five to seven Anita books were pure dynamite. They blew the doors and the lid right off one of the most persistent myths of our time--that women don't get angry. Women are trained from birth by massive social and cultural weight to make nice, get along, smooth things over.

It's what makes us such good and expedient victims of so much violent and domestic crime.

But an angry woman with a gun, a reason to use it, and a narrative framework that says she's justified? That kicks the victim mentality straight in the pants. Chandler and Hammett's noir masterpieces were about men trying to be decent in an indecent urban world, where the decks are stacked against you and the fumes of cigarette smoke and liquor don't quite hide poverty and sleaze. Urban fantasy borrows that smoke, sleaze, decency-in-an-indecent world, and lights its fumes with a match borrowed from chop-saki action films.

The use of magic in UF is also particularly telling. Magic in fiction is the time-honored way of slipping a hand up the skirt of convention and giving her something to smile mysteriously about. It's a way to frame deep questions without getting boring; a way to explore what-ifs. Every urban fantasy novel worth its salt has magic that costs something, whether it's cash, blood, innocence, or just plain physical energy. Magic also allows more gray spaces to be opened up, so the ambiguity can breathe.

I think urban fantasy is a blooming of ambiguity in fiction, and I'm incredibly excited to see where it goes next. I think it's awesome that we as a culture are having these sorts of conversations about gender, power, violence, expectations, victimhood, justice, sexual roles, and a whole kit and caboodle of other issues. The interplay between paranormal romance and UF is particularly fascinating to watch and analyze because of the sheer numbers of female authors who write both.

One thing's for sure, though. This isn't just about chicks in leather.
Although, you know, I never say no to a nice pair of leather pants. Or a well-maintained gun or katana.