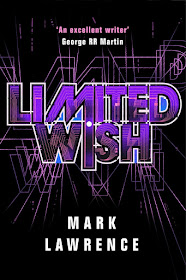 You may recall that I was intrigued when Mark Lawrence made the announcement that he was releasing a science fiction series. With nine fantasy works under his belt and a well-deserved reputation as one of the best speculative fiction authors writing today, I wondered if he'd manage to make the jump to science fiction and wow readers in a different subgenre. Well, I should have known not to show any doubts. Though it was a very short book, One Word Kill delivered on pretty much all fronts.

Time would tell if Lawrence could maintain this level of quality and originality throughout the trilogy, which brings us to this sequel, Limited Wish. It's very similar to its predecessor. Some might say too similar, what with familiar plot devices used yet again. But overall, everything works quite well and this second volume avoids the many pitfalls of the middle book syndrome. Hence, if you've enjoyed One Word Kill, you should feel the same way about Limited Wish.

One choice. Two possible timelines. And a world hanging in the balance.

It’s the summer of 1986 and reluctant prodigy Nick Hayes is a student at Cambridge University, working with world-renowned mathematician Professor Halligan. He just wants to be a regular student, but regular isn’t really an option for a boy-genius cancer survivor who’s already dabbled in time travel.

When he crosses paths with a mysterious yet curiously familiar girl, Nick discovers that creases have appeared in the fabric of time, and that he is at the centre of the disruption. Only Nick can resolve this time paradox before the damage becomes catastrophic for both him and the future of the world. Time is running out—literally.

Wrapped up with him in this potentially apocalyptic scenario are his ex-girlfriend, Mia, and fellow student Helen. Facing the world-ending chaos of a split in time, Nick must act fast and make the choice of a lifetime—or lifetimes.

One of the aspects that made One World Kill such a memorable read was how Lawrence conveyed the pain, the fear, and the helplessness of dealing with any form of cancer. The scenes occurring at the hospital during chemo treatments in particular, and how they affect people physically, psychologically, and emotionally, were quite powerful. I feel that he captured the essence of the disease and its effects on the patient and everyone around him. With Nick now in remission, Limited Wish is more about a young genius adapting to university life, the teenage angst he experiences along the way, and the mind-boggling and gut-wrenching drama of boy-girl relationships. But cancer has changed him and may yet rear its ugly head again at any time. Because of that, even though he must deal with the same issues as any other teenager his age, life is different for Nick. And I'm not even talking about time travel.

As a matter of course, the author's worldbuilding is only there to provide the tale's backdrop and doesn't intrude on the storytelling. Once again, quantum physics, the multiverse theory, and time traveling are at the heart of this sequel, but this is by no means a hard scifi novel. Mark Lawrence spent years working as a scientist and he does his best to dumb down the science regarding the time paradox and once more I'd say he succeeded in doing so. So far, the Impossible Times series remains Lawrence's most accessible works to date.

And although the universe is doing its best to kill Nick while he spends the week at Cambridge University, every weekend he takes time to meet up with the rest of the gang back home to play Dungeons and Dragons. Mia is now Dungeon Master and to Nick's dismay she brought her new boyfriend along for this new campaign. And as if this situation is not complicated enough, the guy plays a do-gooder paladin which threatens to be the death of them all. It's now obvious that each book title has to do with a particular spell or something similar, and that these role-playing game sessions have repercussions on the plot at large. One Word Kill was Nick and Mia's tale for the most part, but the supporting cast from the first installment plays kind of a lesser role in this one. Understandably, Nick takes center stage yet again, but he's joined by fellow student Helen and another strange girl who may hold the key to solving this world-shaking puzzle.

As was the case with its predecessor, Limited Wish is another short science fiction work. Lawrence keeps everything moving at a good clip and the rhythm is never an issue. Once again, this interesting tale makes for a quick read, one you wish could last longer. For some reason, the endgame of One Word Kill was inexplicably rushed. I felt that it robbed the ending of the emotional impact the author probably wished to convey. Not so with Limited Wish, which features a much better paced ending and which sets the stage for what should be a compelling finale in the third volume.

As things stand, Mark Lawrence now has three novels on my provisional speculative fiction top 10 of 2019, with a possible fourth work ending up on the shortlist if Dispel Illusion is as good as its two predecessors. We'll have to wait and see if all four of Lawrence's works published this year can make it to my top 10, but one thing's for sure: It's been a great year so far for the author.

Give these books a shot! And don't forget: Kiss the girl!