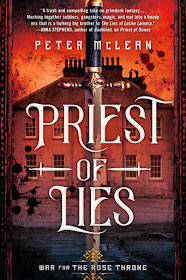 When urban fantasy writer Peter McLean elected to switch subgenres and to try his hand at grimdark, coming up with what people claimed was Gangs of New York meets The Lies of Locke Lamora, I had to give it a go. And even though Priest of Bones suffered from a number of shortcomings, I found the book to be compelling enough for me to want to find out what happens next.

And I'm happy to report that the author upped his game in this sequel and that Priest of Lies is a better read than its predecessor. Moreover, it sets the stage for more fireworks in the forthcoming installments. Indeed, this second volume leaves the door open for lots of possibilities, which bodes well for things to come.

Tomas Piety has been many things: soldier, priest, gangster…and spy. As Tomas’s power grows, the nobility better watch their backs, in this dark and gritty epic fantasy series.

People are weak, and the poorer and more oppressed they are, the weaker they become–until they can’t take it anymore. And when they rise up…may the gods help their oppressors.

When Tomas Piety returned from the war, he just wanted to rebuild his empire of crime with his gang of Pious Men. But his past as a spy for the Queen’s Men drew him back in and brought him more power than he ever imagined.

Now, with half of his city in ashes and the Queen’s Men at his back, the webs of political intrigue stretch out from the capital to pull Tomas in. Dannsburg is calling.

In Dannsburg the nobility fight with words, not blades, but the results are every bit as bloody. In this pit of beasts, Tomas must decide once and for all whether he is truly the people’s champion…or just a priest of lies.

My main gripe with Priest of Bones was that the worldbuilding was virtually nonexistent. Pretty much all of the elements that had to do with this aspect were part of the blurb. Which, to say the least, was disappointing. McLean played his cards extremely close to his chest. Sadly, the plot and its conclusion offered very few answers to the many questions raised by the novel. Thankfully, the author is a little more forthcoming in that regard in Priest of Lies and it's now evident that the War for the Rose Throne series resounds with more depth than first met the eye. Most of those revelations come courtesy of Ailsa and I wish we could have discovered more about the war between the Queen and the Skanians. I also wish we could have learned more about the cunning and magic in general. Alas, we discover things at the same pace as Tomas Piety, and every answer raises its fair share of new questions. Here's to hoping that more secrets will be unveiled in the third volume.

If there's one thing that Peter McLean did particularly well in Priest of Bones, it was to come up with a dark and brooding story that was perfect for the grimdark audience. A cast of morally ambiguous and flawed protagonists populated this war-torn tale. It was a dismal and disturbing read at times, with a plot that included alcohol and substance abuse, graphic violence, torture, juvenile prostitution, pedophilia, and sexual assault. Hence, it made for a rather bleak read. McLean went into full grimdark mode and the same can be said of this sequel. Priest of Lies, though it features a number of poignant moments having to do with post traumatic stress disorder, is another somber read that is grimdark through and through.

As a matter of course, Tomas Piety's perspective remains the only point of view of Priest of Lies. You may recall that I felt it could occasionally be detrimental to the story in the first volume. Not that the man is not an interesting narrator, but like the author he's not particularly forthcoming when it comes to sharing information. The leader of the Pious Men obviously knew a lot more than he let on, yet he didn't really want to talk about it. For that reason, I opined that Priest of Bones would have been a much better novel had it featured additional perspectives, or a third person narrator. Things are much better in this sequel and I found Father Piety to be a more likable fellow this second time around. Traveling to Dannsburg with his wife takes him out of his comfort zone and the man must adapt rapidly to his new environment. This forces him to evolve and it makes it easier to root for him. Most of the characters comprising the supporting cast were more or less just nametags and not genuine people at first, but a number of them finally come into their own in Priest of Lies. Especially Bloody Anne and Billy the Boy, which was nice.

Priest of Bones often felt like an overlong introduction that lacked enough material to make a full novel and was padded with a number of violent and fairly superfluous scenes. Peter McLean pushes the plot forward a lot more in this sequel and things are definitely looking up. As I mentioned, revelations are made and demonstrate that the War for the Rose Throne is a more complex and multilayered series than we first believed. Time will tell just how convoluted the plot truly is.

The first volume suffered from some pacing issues, especially at the beginning and in the middle of the novel. Not so with Priest of Lies. McLean keeps the plot moving, adding new layers to the storylines in both Ellinburg and Dannsburg sequences. The end of the latter is particularly satisfying, as are the endgame and finale of Priest of Lies. Even if the ending is a bit predictable.

If you like your grimdark gritty and bloody, then the War for the Rose Throne is definitely for you! I'm eagerly awaiting the third installment!