Dominion: An Anthology of Speculative Fiction from Africa and the African Diaspora 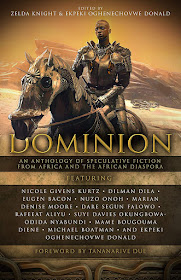 You may recall that I enjoyed Suyi Davies Okungbowa's Nigerian god-punk fantasy debut, David Mogo, Godhunter, last year. And since he's part of this project, I figure it's the reason why I was invited to sample Dominion a few months before its release date. On the off chance of discovering the next Nnedi Okorafor, I was happy to give this one a shot!

Labeled as the first speculative fiction anthology completely comprised of works by African writers and authors from the African Diaspora, Dominion really intrigued me. To begin with, I was aware that it would probably be unlike any other SFF anthology out there. This could be construed as good thing. Understandably, it could also be detrimental to potential readers if the stories were too different, too unfamiliar. So I went into these short fiction pieces with an open mind and I thoroughly enjoyed my journey.

Dominion is the first anthology of speculative fiction and poetry by Africans and the African Diaspora. An old god rises up each fall to test his subjects. Once an old woman’s pet, a robot sent to mine an asteroid faces an existential crisis. A magician and his son time-travel to Ngoni country and try to change the course of history. A dead child returns to haunt his grieving mother with terrifying consequences. Candace, an ambitious middle manager, is handed a project that will force her to confront the ethical ramifications of her company’s latest project—the monetization of human memory. Osupa, a newborn village in pre-colonial Yorubaland populated by refugees of war, is recovering after a great storm when a young man and woman are struck by lightning, causing three priests to divine the coming intrusion of a titanic object from beyond the sky.

A magician teams up with a disgruntled civil servant to find his missing wand. A taboo error in a black market trade brings a man face-to-face with his deceased father—literally. The death of a King sets off a chain of events that ensnare a trickster, an insane killing machine, and a princess, threatening to upend their post-apocalyptic world. Africa is caught in the tug-of-war between two warring Chinas, and for Ibrahim torn between the lashings of his soul and the pain of the world around him, what will emerge? When the Goddess of Vengeance locates the souls of her stolen believers, she comes to a midwestern town with a terrible past, seeking the darkest reparations. In a post-apocalyptic world devastated by nuclear war, survivors gather in Ife-Iyoku, the spiritual capital of the ancient Oyo Empire, where they are altered in fantastic ways by its magic and power.

The two editors, Zelda Knight and Ekpeki Oghenechovwe Donald, compiled short fiction tales that cover the length and breadth of everything that falls under the speculative fiction umbrella. Such a convergence of genres and subgenres makes for captivating reading. Though most of the pieces are not culturally familiar in style, tone, or context to Western SFF readers, they all have something that can appeal to a broader audience. I'm persuaded that I couldn't understand and invariably missed some of the references and nuances found throughout the book. And yet, that never prevented me from enjoying the stories found within its pages.

Anthologies and collections of short fiction can be tricky things. Most of them consist of a few gems and some other quality reads, but inevitably these works are padded with filler material that takes something away from the overall reading experience. Not so with Dominion. It would be a lie to say that it's all killer material. That would have been too good to be true. But even though some stories stand out and resonated more with me, I felt that every piece contained in this anthology had something to offer and was a worthwhile addition to the project.

Dominion features quite a few post-apocalyptic stories in which the protagonists, their societies, their nations have to deal with profound emotional and psychological scars from the past that can never fully heal. Many of these tales are about dealing with or confronting these wounds, so people can move forward, and how difficult and life-changing that journey can be. Some are about evolution and transcendence. All in all, these short stories can be quite compelling and thought-provoking.

Another facet which I liked was the fact that many of the tales don't shy away from exploring sensitive issues such as domestic violence, abortion, sexual assault, violence against women and children, racism, and sexism, etc. This is no YA fare, so consider yourself warned. These stories tackle serious subject matters without sugarcoating everything to make it easier for the reader to deal with them.

My favorites include "The Unclean" by Nuzo Onoh, "A Mastery of German" by Marian Denise Moore, "The Satellite Charmer" by Mame Bougouma Diene, "Clanfall: Death of Kings" by Odida Nyabundi, and "Ife-Iyoku, The Tale of Imadeyunuagbon" by Ekpeki Oghenechovwe Donald.

Do yourself a favor and pre-order Dominion: An Anthology of Speculative Fiction from Africa and the African Diaspora. It's an entertaining, stimulating, and inspiring collection of stories that will force you to look at the world in a different way. Moreover, it shows once again that international talent can take speculative fiction to new heights! Here's to hoping that there will be more such anthologies in the future so that we can discover yet more foreign talents that deserve to be more widely read.